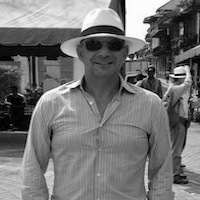 Onuralp Kalleci – born in Turkey and moved to USA as a teenager and concluded his studies in USA. He is graduated from California State Polythechnic University Pomona with a bachelor degree on Hotel Management in 1998.

He started his professional career in front office, catering and various operational departments of hotels in San Diego.

Due to his family arrangements, he came back to Turkey and run the Crystal Diving boat company in Bodrum which he started the first underwater photography services in Turkey. He met with Murat Ozgul – one of the current co-founders of LaranazUSA during this period.

Later on he decided to move back to California - USA and started his own business as as a guide, driver, translator for the hotel guests that he used to work earlier in his community.

In 2012, he partnered with Murat & Hakan and became one of the co-founders of LaranazUSA. His expertise on local suppliers especially with hotels in California is a great asset.

“His character and service oriented approach makes everyone’s life easy, happy & satisfied. His ambition for helping & serving for the clients are impressive. If needed, he does not hesitate to jump on the vehicle and drive thousands of miles” said his partners.